Sub-headline: "And the Surrender of Western Civilization to Barbarism."

This news story caught my eye because it's so preposterous, but then I asked why this story is coming out right now. It's promoting the old KGB psyop from the 70's that started the whole global warming scam -- global cooling from a nuclear war would destroy planet. I had to ask myself why? and why now? 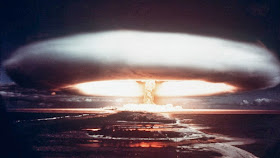 In the 70's, the psychological operation to scare the bejeezus out of the West was intended to promote nuclear disarmament by the West. When the science didn't fly and no unilateral disarmament was forthcoming, even under the administration of the socialist buffoon Jimmy Carter, the USSR morphed the scam into global *warming* by fossil fuels, selling it to the gullible green movement, as a means of crippling the U.S. economy (thereby to cripple funding for defense). People bought it, hook, line and sinker.

But now we are brought full circle:


DENVER (CBS4) – With an estimated 17,000 nuclear weapons in the world... Even a relatively small regional nuclear war, like a conflict between India and Pakistan, could spark a global environmental catastrophe, says a new study.

...Firestorms would belch over 5 million tons of ash into the sky. "The ash would absorb the sun’s rays, causing deadly cooling on the surface.

Global temperatures would plummet my nearly 3 degrees Farenheit on average, with most of North America experiencing winters that would be colder by 4 to 10 degrees. Lethal frosts would cover the Earth and reduce the growing seasons bu about a month for several years."

So you see... global cooling once again. To scare us. It's preposterous because one single volcanic eruption can belch more ash into the sky than 17,000 nuclear weapons, but they're using those same "simulations" that have failed to correctly predict global warming.

In 2009 I wrote (not the first time) about Obama's real agenda: unilateral disarmament of the United States nuclear deterrent. This CBS story, coming out at this time, from the National Center for Atmospheric Research in Boulder, Colorado, near where I live, strikes me as being of *high* probability as preparing the public for Obama's first strike on our nuclear arsenal. The timing is right, and I'd bet the authors have a connection through the communist internationale back to the White House.

As I wrote in April 11, 2009 ("The Next Phase in Obama's Rush Towards Unilateral Disarmament"),


"First Obama announces in Prague his goal of unilateral nuclear disarmament. Now, as part of arms control negotiations, he is nominating someone who wants the U.S. to eliminate our conventional arms, as well."...

Obama has steadily been doing both for 6 years. The new START treaty signed in his first year in office mandated 30% cuts in our nuclear deterrent while allowing the Russians to increase and modernize their deterrent. He has eliminated almost every new weapons modernization program we have, and is unilaterally eliminating one squadron of our ICBMs (on his word only, mind you), and is in the process of reducing our army and navy to the lowest levels since before World War 2.

I have predicted that he will order the elimination of the entire U.S. nuclear deterrent. This is his raison d'etre -- his reason for being in that job. His *only* reason. I have said you can predict his every action based on what Putin wants. "Tell Vladimir I will have more flexibility after the election", he told Russian President Medvedev, as caught on an open mike.

So my prediction once again: this CBS story is to scare and prepare the public for Obama's announcement that he intends to unilaterally eliminate the entire U.S. nuclear deterrent as a threat to the planet. Stay tuned. More is coming.

Comments must be polite and well-reasoned, but passion is allowed when directed at the subject matter and not someone who posts -- violate this, and your comment doesn't get posted. Comments may not post immediately -- I'm pretty busy and don't live on the web.